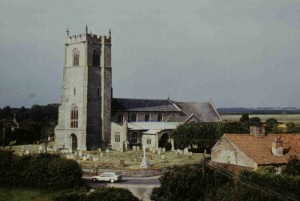 The Parish Church of Grimston was re-built in the 13th century and expanded in the 14th and 15th centuries. Later centuries saw new roof lines, alterations at the Reformation and in Victorian times, and many times before and since.  The Church is sited on Gayton Road in the South-East corner of the built-up part of the village, is the oldest building in the village, with Saxon origins, and possibly built where there had been a Roman temple. The church is dedicated to St.Botolph, who is thought to have visited the village in the eighth century. Most of the building dates from the thirteenth to fifteenth centuries. However it has been maintained and modified throughout the centuries to serve the needs of village people in each age. The church has always been at the centre of village life, and its parish registers (complete back to 1552) record the people of all its generation. Today’s congregation, with the help of the Friends of St.Botolph’s, have the responsibility of keeping this ancient building not only in good repair, but as an inspiring place of worship.Most recently a new porch door has been fitted in 2013 and the South aisle roof was refurbished in 2015. It is a Grade 1 Listed building.

Grimston Parish is part of group of parishes cared for by the Revd. Jane Holmes based at Gayton Rectory, assisted by the Revd. Judith Pollard based at the Rectory in Watery Lane, near to St.Botolph’s Church. Most Sundays there is a Service of Worship at 10.30am. As well as Sunday Services, baptisms, weddings and funerals are held here. The Parish is part of the Grimston, Gayton and Massingham Benefice:

All but the most recent Parish records since 1552 are in the care of Norfolk Record Office in Norwich, but for those searching for family history or other research,  the Team Rector holds jpg photos of every page of the registers and transcriptions of nearly all of them. They will be only too pleased to assist you.